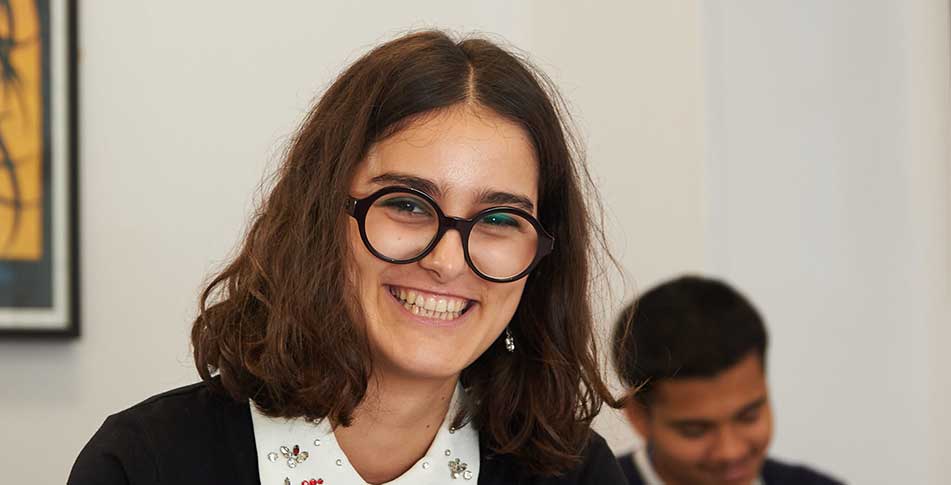 Ashbourne has a vibrant English Faculty whose teachers are passionate about their subject. Students explore drama, poetry and prose in a lively and engaging classroom environment. They are encouraged to experience a range of theatre and offered plenty of opportunities to perform their own work, including at Ashbourne’s annual Revue which showcases students’ artistic talents.

London offers students an exceptional choice of shows, events and exhibitions as well as outstanding libraries and bookshops.

Stories shape the way we think and live. They enable us to share, understand and pass on ideas, beliefs and culture. They can transport you to another world, put you in other people’s shoes, influence your behaviour and connect you with others.

Studying literature will equip you with the skills to analyse, interpret and discuss themes, ideas and contexts within stories, as well as developing your ability to express yourself through dialogue, argument, prose and poetry. It will also teach you how to plan and research as well as expand your understanding of history, culture, philosophy and human behaviour.

Students will read a range of classic literature and poetry and learn how to develop their own responses to texts, analyse language, form and structures, and explore relationships between texts and contexts. There are two components for this course: Shakespeare and Post-1914 Literature and 19th-century Novel and Poetry since 1789.

Shakepeare’s Macbeth (or the Scottish Play as it’s known among Thesps) exposes how ruthless and bloodthirsty desire for power can lead to tragedy and psychological trauma. The play was originally performed around 1606 during the reign of James 1 (then king of Scotland and England and patron of Shakespeare’s acting company). It is one of Shakespeare’s most often performed plays.

George Orwell’s Animal Farm is a fable about the events leading to the 1917 Russian Revolution and rise of Stalin. The novel explores the ideas of freedom, rebellion and political corruption. Orwell, a democratic socialist, was deeply skeptical about Stalin’s ambitions and wrote the book in 1945 as a direct and contemporary response to the regime. Britain was in wartime alliance with Russia at the time making the publishing of the book extremely controversial.

Ebenezer Scrooge is a miserable old penny-pincher who hates everyone, especially children, until one Christmas when he is visited by three ghosts from the past, present and future. Scared rotten he begins to see the error of his ways and rediscovers the joy of giving.

Charles Dickens was one of the most prolific and well-loved writers of the Victorian era and much celebrated during his own lifetime. Some of his most popular novels include Oliver Twist, David Copperfield and Great Expectations.

Examining the theme of time and place students will compare language, structure, form and contextual features of two poems selected from a collection of 15.

Elle spent five years teaching in Australia and the UK before joining Ashbourne. She teaches English Literature as well as English as a second language (for IELTS) at the college.

Lauren’s love and enthusiasm for English inspires her students to find their own passion and embrace all that the subject has to offer. She is one of Ashbourne’s most encouraging and effective teachers who has played a full and active role in the college’s academic and cultural life since joining in 2014.